The evolution of payments 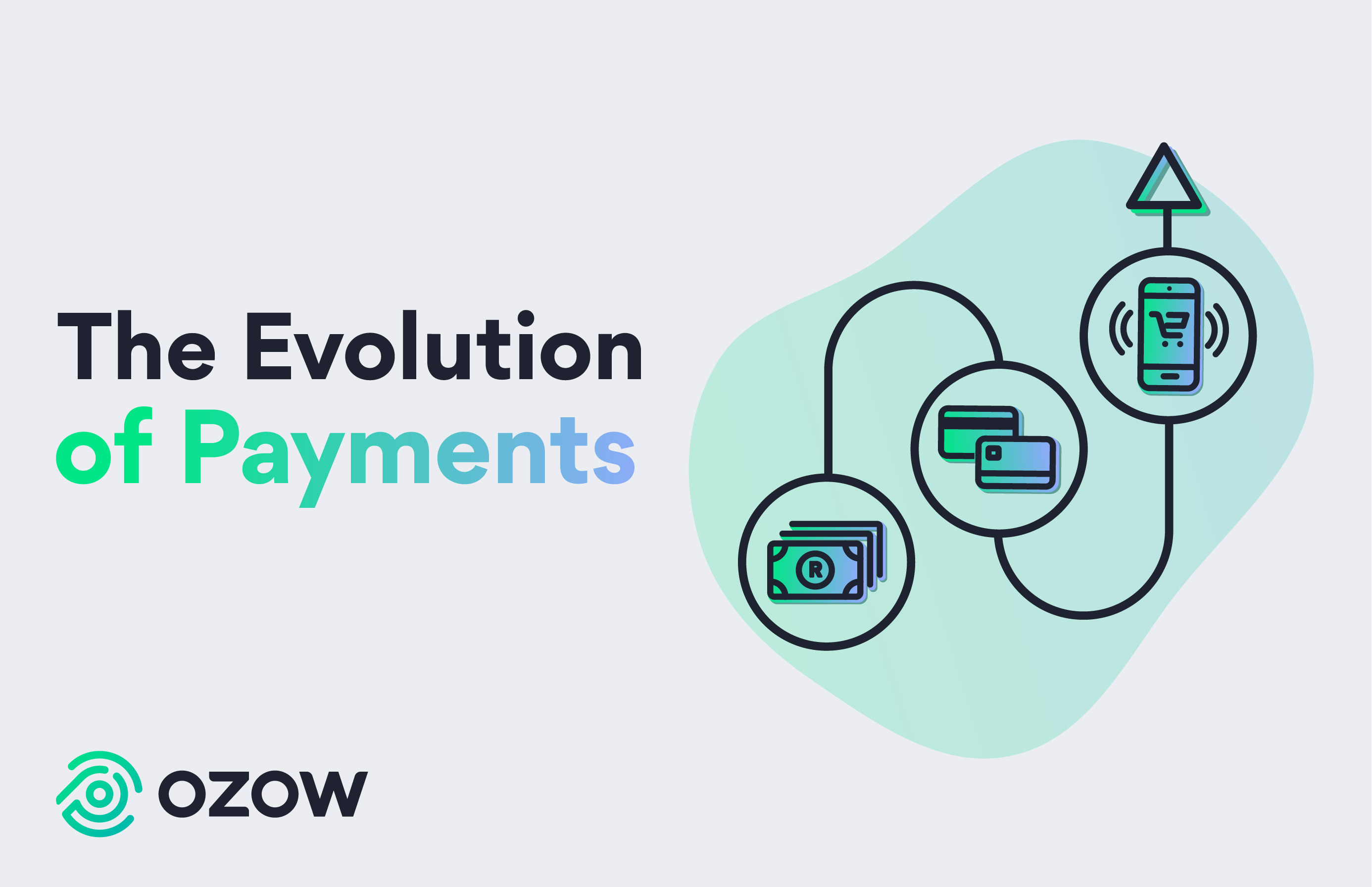 The idea of trading for goods and services has been a part of human society since at least the prehistoric era. Since then, we’ve introduced complex payment systems to facilitate modern trading.

But how did we get here?

Historically, early payment methods helped facilitate the trading process, but they were still cumbersome to store, transport and often deteriorated.

Fast forward several thousand years, and the development of new technologies has influenced the way we go about life. With the invention of the printing press, we began to print our currency. Fast forward a few years and as the first trans-continental railroad snaked across North America, Western Union undertook the earliest known money transfer via telegram in the 1860’s. This eventually became the foundation for what we know as Electronic Funds Transfers (EFTs) today.

The 80s to the noughties

With the rise of the internet came even more prominent tech advancements.

By the early 80’s, the tech boom was in full effect. It was driven by the development of the internet, which took many turns before it evolved to what we use today. Yet it still took almost two decades from the birth of the internet to the creation of online payments.

With the boom of the internet, businesses that were savvy enough and brave enough to use technology reaped the long-term rewards. Online stores drove technology to a point that, as customer interest grew, a further evolution in payments was required. Yet it was only around the mid-1990’s that online payments were finally established.

Merchants accepting online payments required special (and often expensive) equipment and software just to process transactions. Today, skills training and access to these services have become more widely available. However with the rise of these systems came the rise of digital theft or in this case, ‘hacking’.

It was during this time that the first digital heist occurred: Vladimir Levin tricked a bank into accessing $10 million from their large corporate clients. He then got the bank to wire the money into accounts he’d set up across the globe. He was caught, but his action was nevertheless a major catalyst for driving payments and data security that would eventually inform policy today as we know it.

Beginning in the early 90’s, payment systems began to improve drastically. The very first mobile payment occurred in 1996, when Coca-Cola sold cans of Coke at vending machines via text message.

This era also saw the birth of the world’s first company to specialize in online payments: PayPal, founded by Peter Thiel, Ken Howery and other investors including Elon Musk.

Noughties to the early 10’s

The early 2000s were an interesting time both socially and digitally.

After the initial craze of Y2K the internet evolved to Web 2.0. While Web 1.0 consisted of closed static pages, Web 2.0 utilised dynamic pages and opened the internet up to user generated content. Users looking to publish their own content only needed to know how to use JavaScript and AJAX.

As the web became more accessible to users, individuals could now directly impact payment systems with their own app creations or system processes. This affect was compounded by the rise of the smartphone, which began to democratise access to complex computing systems and the internet.

David B. Humphry, a Professor of Finance at Florida State University, aptly described the future value of electronic payments, saying: “The social costs of a payment system could be considerably reduced if it shifted to electronics.”

He also went on to mention that “surveys consistently report – in the absence of direct pricing – that electronic payments have greater adoption rates among young adults and individuals with higher incomes.” While he was right about the rate of adoption, the accessibility of mobile devices alone meant that more people, in a broader range of income spectrums, could have access to digital financial services.

With this burst in technology and innovation, regulation had to evolve too. As newer technologies became increasingly accessible institutions had to adapt, with the introduction of stricter protocols and rules around data security. If anything like the Vladimir Levin heist mentioned earlier occurred again, it would be even more devastating.

Despite many ‘micro developments’ in the digital space, it was only near the turn of the decade that things really got interesting. With the payment space evolving at a rapid rate, so too did fringe systems. One such standout during this period was none other than Bitcoin.

As an idea, Bitcoin and blockchain latched themselves firmly to the premise of a decentralised currency powered by a network of users and collaborators that had no reliance on a central authority.

Fuelled by the distrust in traditional banking systems after the financial crisis of 2008, the idea of having your money where it wasn’t vulnerable was incredibly appealing. However, many were still wary of outside influences interacting with their money. The negative connotation around Bitcoin and blockchain’s connection to Silk Road – a digital black market – didn’t help.

But Bitcoin and blockchain technology weren’t the only useful payments systems to emerge. This was also the era in which digital wallets and peer-to-peer payments took off. After a late meal one day in the year 2009, Andrew Kortina and Iqram Magdon-Ismail wanted to split the bill without having to use cash or write a cheque. With this niggling thought, they launched one of the largest digital financial services to date – Venmo.

This notion of peer-to-peer payments offered a more efficient way of transacting than using cash, such as musicians selling their merchandise and music without having to keep cash on hand. It also appealed to students and those who often pooled money for entertainment or other purposes.

But these innovations were just the start. Things grew exponentially from 2010 onwards.

With the launch of Venmo, many larger corporations began to see the value in peer-to-peer services. Companies saw the value in simpler payment systems and pivoted to address issues with payment portals with their own offerings, notably Google Pay and Apple Pay. Other major services included Cash App, Zelle and Samsung Pay.

Consumers had it better than ever. More competition meant pricing became more competitive. Technology seemed to level the playing field.

Collaborative systems such as i-Pay, facilitated transactions between customers and merchants, making the overall payments process easier. Today, i-Pay has evolved to become Ozow, facilitating billions of Rands in transactions every year.

Globally the trend was much the same. While the online payment process was still somewhat cumbersome, the drive to decrease friction and increase innovation reached a fever pitch. Services such as price comparison systems were developed to such a standard that scouring the web for the best deals became unnecessary, as you had deals at your fingertips.

More recently the idea of global trading for smaller businesses has changed from a strategic anomaly to almost the norm. Businesses can now cross borders and oceans, seamlessly reaching consumers halfway across the world with only regulatory barriers in the way.

But while payment systems still have a bit of catching up to do, it's still possible to purchase from stores consumers wouldn’t have had access to even a few years ago.

Globalisation took a massive knock as the movement of not only goods, but people were restricted during the Covid-19 pandemic. Online shopping however, thrived. In fact, it grew exponentially.

Basic goods and services were still needed, so society turned to online shopping. To put things into perspective, in 2019, global retail eCommerce sales were valued at roughly $3 billion, today, they are valued at over $5 billion according to Statista.

If the 2010s were the foundation of disruptive apps and tech, 2020 and beyond will be the era in which we’ll see creative usage of these technologies. One common emerging trend is alternative payment solutions, such as Buy Now Pay Later (BNPL).

For those born before the mid-2000s, you’ve probably heard of BNPL. In South Africa it was known as a layby. This practice allowed the store to keep the goods you wanted to buy while you paid off monthly instalments, after which the goods would be released. The only inconvenience here was that you had to go to the store to pay it off each month.

BNPL is the layby of the current era in the form of evolved store credit. BNPL services allow you to receive your goods immediately while paying off instalments, with the first due at checkout.

Another emerging trend is Web 3.0. This evolution from Web 2.0 places more resilience and functionality on AI technology and automation. Its aim is to enable machines to understand information similarly to humans.

In comparison to the early 2000s, considered to be a technological wild west, Web 3.0 is touted to be its digital equivalent, causing major disruptions and innovations in the market.

In short, the future holds a wealth of potential. The rise in digital wallets, better adoption of digital financial services and even greater financial inclusion is opening the door for millions of people. But with this rise in innovation and inclusion, regulation, security and education around new systems will have to change.

Much like Visa and Mastercard opened the idea of payment rails, the disruption in tech will have to widen those same rails to incorporate newer technologies. Peer-to-peer payment systems are still in their infancy stages, learning to crawl before it can walk. Once those systems can walk, it will be incredible to see them run.

8 minutes
ChatGPT and the age of accessible AI
Read more