The Digital Money Seminar hosted by the IMF and the SARB 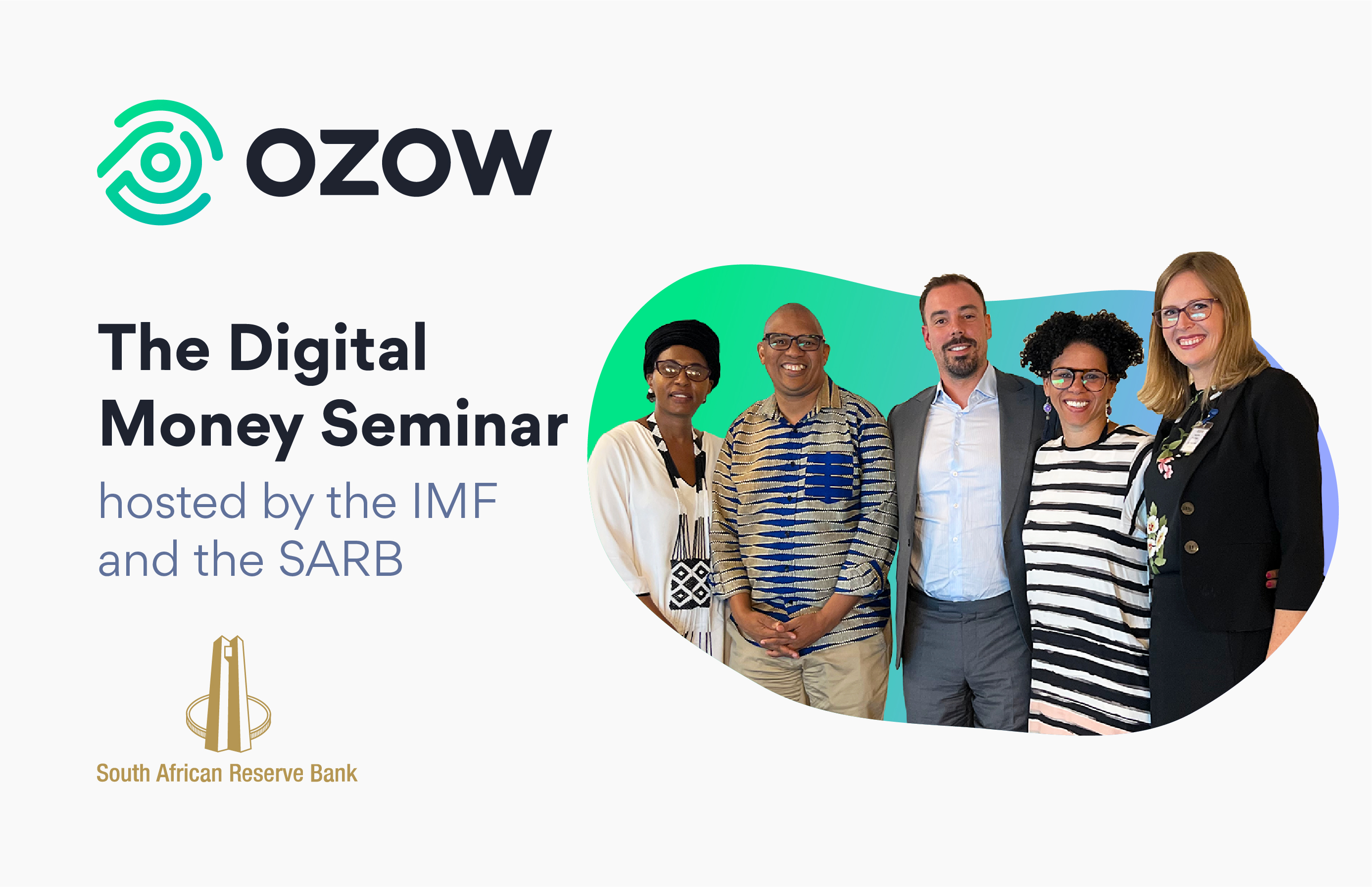 From the 24th to the 28th of October 2022 the International Monetary Fund (IMF) in collaboration with the South African Reserve Bank (SARB) held an event called “The Digital Money Seminar – Balancing Innovation and Regulation for a new frontier”. As part of the event Ozow’s CEO and co-founder Thomas Pays was invited to take part in a panel discussion on the topic of “leveraging technology to advance financial inclusion in South Africa”. To better contextualise the importance and intent of the seminar, we first need to provide context on the history and vision of both the IMF and the SARB.

Founded in 1944, in the aftermath of the Great Depression of the 1930s, the International Monetary Fund is a major financial agency of the United Nations, headquartered in Washington DC. It constitutes 190 nations and its stated mission is to “work to foster global monetary cooperation, secure financial stability, facilitate international trade and promote high employment and sustainable economic growth, while reducing poverty around the world”.

The South African Reserve Bank, on the other hand, was established in 1921 and is responsible for formulating and implementing monetary policy, issuing bank notes and coins and supervising the banking system. And while it may have been in existence for over 100 years the SARB is no stranger to innovation. It recognises that advancements in financial technology (fintech) are transforming business models and increasing innovation in financial services. In fact the SARB has established its own Fintech Unit to explore the implications of fintech innovation in South Africa. It has also been integral in the formation of the Intergovernmental Fintech Working Group (IFWG), a forum for regulators to gain deeper insights into fintech innovation.

The IFWG is probably best known for its Regulatory Sandbox (RSB), a controlled, live environment that allows financial sector innovators to safely test new financial products or services they intend to bring to market against existing regulation, while under the supervision of the members of the IFWG.

On the 28th of October The Digital Money Seminar delivered a powerful and well-rounded industry view on the topic of financial inclusion, when it brought together fintech and other payments industry leaders to discuss a number of topics including:

Being one of South Africa’s leading Third Party Payment Providers, with an 80% share of the merchant pay by bank market, and a driving purpose to close the digital divide and create greater financial inclusion, Ozow was a natural fit. However what made the discussion so compelling was the combination of organisations and the members representing them on the panel. Organisations that are traditionally seen as competitors. Outside of Pays, panel members included:

Over the course of the discussion the panel was asked a number of questions around what technology their organisations have already leveraged, and what they plan to leverage, in order to advance financial inclusion in South Africa.

Miranda Perumal spoke on behalf of VISA, saying that they believe the key to success lies not only in technology, but also in merchant and consumer education. She stated that VISA starts by understanding the informal sector use cases and then looks at how the sector can be educated. She went on to say that the payments industry needs to investigate the issuing of virtual cards to the cash dependant, with payments being enabled on existing Unstructured Supplementary Service Data (USSD) channels, as well as the ability to tap to pay via cellular phones.

Lesaka is already well-known within South Africa due to their success in digitising Social Grant Payments, and Mali spoke to this. He began by saying that the good news is that the majority of recipients now have access to grants via their SASSA cards, and that the system has actually increased the safety of card holders. It has done this by allowing users to utilise their cards at most retailers, negating the need to withdraw and therefore carry cash. He went on to reveal that an interesting trend has emerged amongst younger SASSA card holders. Users are reportedly not withdrawing all of their allocated funds at one time, and are instead using the cards as a type of transactional account. This not only demonstrates that consumers are ready for new payment solutions, it shows that they are savvy enough to invent their own use cases for the technology. When asked for comment on the future of SASSA cards he went on to say that Lesaka plans to create greater financial access through the addition of Value Added Services to the existing SASSA card network.

Pays spoke to the rapid adoption of Ozow’s data free payment solutions, and the fact that in just 8 years almost 10% of South Africans are using Ozow pay by bank, with over a million users transacting on the platform each month. However, he went on to say that he believes there is no single product that will solve the issue of financial inclusion in South Africa. Instead, he believes that collaboration between fintech, the banks and regulators is what is needed to facilitate true open banking in South Africa, with the rest of the panel agreeing with the statement.

It is encouraging to note the ease with which these four industry leaders engaged with each other, and how their various organisations are willing to collaborate for the betterment of our country. Because it is only through this kind of collaboration that the SARB’s “Vision 2025” will come to life.

As a reminder, in 2018 the SARB published the National Payment System Framework and Strategy – Vision 2025. The paper articulates the overarching vision for the future of payments systems in South Africa. It further sets out a framework that captures the goals industry stakeholders should pursue collaboratively, including financial inclusion, regional integration and the promotion of competition and innovation.

When asked for a comment to close out this article Pays said that “it is truly the most exciting of times for Ozow and the payments industry, with banks, regulators and fintech willing and able to collaborate on solutions that will ultimately not only deliver financial inclusion, but financial freedom for all South Africans”.

4 minutes, 23 seconds
The Future of Risk and Compliance
Read more