Why use a lemon to build a unicorn? 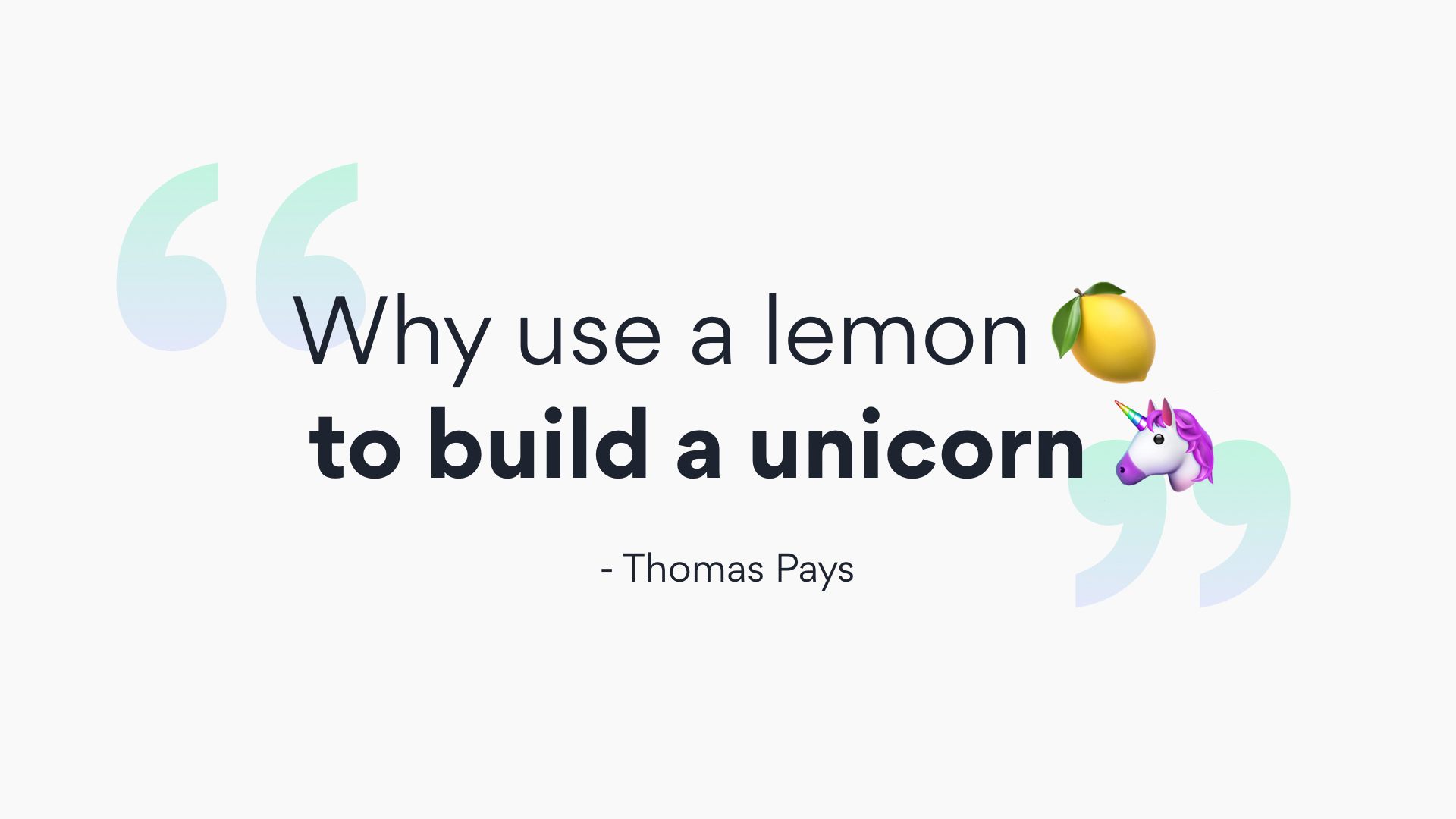 The 24th hour on start-ups and fast cars

The 24-Hours of iLamuna is a South African endurance race based on the model of the 24-Hours of Lemons. ‘iLamuna’ is the Zulu translation of ‘lemon’, used to describe a flawed car, often second-hand and in poor condition. Both races take their inspiration from the famed 24-Hours of Le Mans race. Teams are tasked with building or buying a car capable of surviving being driven constantly, as fast as possible, for the full 24 hours.

However like all endurance races, mere speed isn’t enough to win; the goal is to finish as many laps as possible in the allotted time. It is a task that demands a certain fearlessness, the tenacity to keep going beyond the boundaries of your own faculties, and those of the car you drive.

Unlike Le Mans, which sees the world’s most prestigious automobile manufacturers spending millions to create custom machines just for race day, the Lemons and iLamuna races have introduced a budget twist, lowering the barrier to entry but introducing a unique set of challenges.

At first glance, the story of racing a late-90s BMW around Red Star Raceway outside Pretoria, might not seem to have much in common with building a 21st Century fintech company. Yet, the quest to compete in a nearly 25-year-old car – covering more than 1 600km in just 24-hours – has undeniable echoes of the journey of Thomas Pays, CEO and co-founder of Ozow and the broader team behind him.

For Thomas, both the race and the business world hold to the same principles: “I think ultimately it all boils down to research, preparation, and never knowing whether you’ve done enough until it’s go time. Preparation for the race meant choosing the right parts and components for the car to make it through the full 24 hours.” And in a start up? “You need to make sure you’ve got the right technology and tools to make the business succeed.”

Taking part in the 24-Hours of iLamuna begins with a major obstacle: teams are allowed a budget of only R50 000. By contrast, the cheapest new car in South Africa is the Chinese-made BAIC D20 hatchback, considered a steal for nearly three times the iLamuna budget.

These constraints mean that teams need to make a choice. Either buy a comparatively whole car and hope it’s in good enough condition to survive the gruelling race, or buy a cheaper – and probably more compromised – car and hope there’s enough budget left to make it viable.

For Thomas and Ozow’s team of racers, Marketing Strategist Shaylen Padayachee, and Head of User Experience and Design Justin Evans, these sorts of hurdles are not unfamiliar. The birth of Ozow was not an easy one, and it featured more than it’s fair share of difficulties.

Thomas, alongside developers Lyle Eckstein and Mitchan Adams, founded Ozow in 2014 as i-Pay. The founding of the company was driven by Thomas’ – an already established entrepreneur – desire to move to the next stage of his career, going beyond building bigger and better, he wanted to pursue impact that changed lives.

In South Africa, millions of people have limited access to finance. As Thomas puts it: “Access to finance has always been about banks, established institutions that have been around for hundreds of years. I thought this was the broadest, biggest challenge we could face: competing with financial institutes, with unlimited funding.” By contrast, Ozow was driven by agility, innovation, and cutting-edge technology.

Amongst the company’s biggest challenges was the lack of technical infrastructure for what they were trying to do. Thomas describes the problem thus: “How do you build a house when there’s no foundation?” The pay by bank system that has become the bedrock of Ozow’s offering simply wasn’t possible when the company first started. The concept needed banking institutions to begin the process of deploying the necessary infrastructure: “It was missing the building block between banks, consumers and merchants. It wasn’t until later that we were able to glue them together – not only in the heart of Sandton, but also in rural areas and townships.”

But progress isn’t always smooth, and the early years of Ozow had their share of compromises and failures. Likewise, the 24-Hours of iLamuna had it’s own difficulties. In fact, the first attempt at a nine-hour endurance race by the Ozow team turned out to be a three-hour one when their borrowed car suffered a clutch failure that proved impossible to recover from. Shaylen Padayachee, one of the driver’s at the nine-hour commented on what the failure felt like and what it taught the team.

Shaylen: “After the excitement and build up it was incredibly disappointing to only make it through three hours of the nine-hour rally. It was a humbling experience, one that taught us some valuable lessons, but it also only made us hungrier to compete and more determined to finish a race”

To that end Thomas and co. set their sights on a new, more ambitious goal. Instead of finishing a nine-hour race in a borrowed car, they’d find their own car to compete, this time taking part in the full 24-Hours of iLamuna.

An ambitious goal may be a powerful driver for success, but achieving it requires more than just drive. It needs understanding, planning, foresight, the ability to execute, and a focus on continuous refinement.

For Ozow’s race team, this meant finding a car that could survive the punishment of 24-hours of constant driving at speed. It meant settling on a plan for who would drive and when (not to mention who would sleep when). It meant planning for potential failure. It meant putting everything together on the day. And finally, it meant being willing to push constantly to improve.

Recognising the scale of the task, the team – relatively inexperienced in this arena – chose to reach beyond their ranks for help. They brought in Bernard Haupt, a veteran who’d been racing since he was tall enough to see over a steering wheel, winning multiple championships along the way. “When we talk about recruitment,” says Thomas, “we always look at people who’ve been there and done that, and can replicate that success. Bernard had all the skills and characteristics to complement a very green team; it’s about picking someone who understands the requirements.” To further bolster the team they also added a reliable mechanic and a fourth driver.

Bernard’s guidance marked a notable step up from the previous attempt at a nine-hour race, where a poor choice by the team’s then-mechanic contributed directly to the early retirement of the car.

In fact, building an effective team is key to Thomas’ conception of what has made Ozow a success. He counts early missteps with recruitment among the company’s failures: “A company’s success is built around products, but product success is built around winning teams. Some of our biggest failures came from hiring the wrong player.” Ultimately we learned to overcome these challenges with continuous improvements and optimisation in recruitment, and of course not being willing to settle. We've grown to the point that we build teams of overachievers that are committed and passionate.”

With Bernard advising the team, they settled on a late-90s BMW - known for its bomb-proof engine. They made sure they were prepared for potential failures to avoid the problems of their earlier attempt. They wrapped the car in rainbows, both as a tribute to Ozow’s unicorn aspirations and as a symbol of the company’s inclusive values.

They were as ready as they were going to be.

At some point, regardless of preparation, the rubber has to meet the road. On race day, Thomas decided to lead from the front with the Le Mans-style start, with a run across the tarmac to buckle himself into the car and pull out for the first lap.

Tackling the stress of a complicated process, he threw himself into the constrictive roll cage, running through the car’s start up sequence and buckling up a four-point harness. The team then traded driving duties throughout the day, going until the tank was empty before turning into the pitlane to change drivers and make the needed adjustments to keep the car going. “We hardly slept,” Thomas notes “once you’re past a certain level of exhaustion you’re too tired to sleep. And as you do get ready to sleep the drivers would come in, and the excitement was contagious, we fed off each other’s energy.”

At 3am, Justin took over for what he thought would be a 45 minute shift. “I was nervous, no sleep. The first hour was the toughest – getting used to the track at night.” He describes himself as a considerate driver, but as he drove on, he “saw the purple glow, and as I went around the track it slowly got brighter every time I crossed the line, and it woke me up, then I didn’t want to leave.” He was eventually forced off the track by an emptying tank.

Shaylen had been waiting for an hour-and-a-half for him to finish his “45 minutes”.

Justin points to parallels between his experience during the race and at Ozow. While he started with nerves, he was met by a steadying confidence and a willingness to let him prove himself. Both at the Red Star Raceway and at Ozow he was surprised by the “sheer amount of support and love from just being myself.” He may not be the most aggressive driver, but he slotted perfectly into the team by reducing the strain on the engine, ensuring the car would last the distance.

Shaylen draws his own parallels. After he joined Ozow in 2020, he says, “Capacity was the biggest challenge. I didn’t realise that I was going to do more than my role called for, but it led to fast growth. The commitment was rewarded.” More than that though, he discovered for himself the idea that the company was founded on. “The biggest thing was being able to see the impact you can have, and how quick it can be.”

His race experience reflected this, as he recalled being “surprised at how well I did. You get there and the nerves are in, because you’re new and everyone is more experienced. But then you realise your determination and grit is what’s going to get you through it.” The team pushed each other, hugging at handovers and exhorting performance over the radio.

There may be no truer expression of the spirit of Ozow, and the race, than its dying hours. Shaylen took the car on it’s final, three-hour home stretch. Temperatures in the car had reached 40°C, and he drove in a state of physical and mental exhaustion. His teammates spoke to him through his drive, keeping him alert, until he entered the flow state that allowed him to finish the race, 24 hours after Thomas had started it.

Asked about his proudest moment leading Ozow, Thomas says: “We’ve worked so hard to reach this success. But as good as today is, it’s the worst one moving forward.” In other words, every day is better than the last. And his proudest memory of the race? “Seeing Shay pass the finish line.”

After all the preparation, and planning, and optimization, they’d done enough.