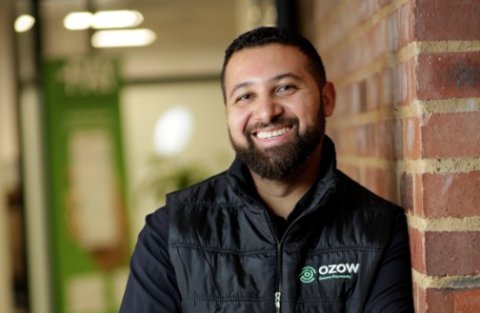 When you think about software developers, chances are your thoughts turn to the popular stereotype of a math geek lurking in the basement, furiously typing away at a keyboard. However, Johannesburg-born Mitchan Adams turns this notion on its head by showing how you can combine a passion for the arts with what many consider to be quite an analytical career path. But then, Adams is not one to follow a traditional approach.

As Ozow co-founder and head of R&D, Adams loves to do things differently. This is something he lives and breathes every single day, and it is something that has aided him in growing Ozow’s secure payment platform to be a true world-leader.

Even though Adams had art as a Matric subject and had wanted to pursue a career in music and acting, his parents had advised him to establish a career platform first, and then return to this creative direction. This resulted in Adams studying software engineering at the Rand Afrikaans University (now known as the University of Johannesburg). Following his graduation in 2004, Adams spent the next two years of his life working at a stockbroking firm, developing and maintaining software that interfaced with the JSE futures stocks and bond markets.

The next eight years saw Adams channelling his focus towards online and card-based payment streams, working at organisations like Setcom as well as many others. It was during this time that his childhood friend, Lyle Eckstein, and himself founded a company to create custom software for small businesses to operate more efficiently.

‍
At the end of 2014, this entrepreneurial drive gave rise to i-Pay (now known as Ozow), which the two of them had co-founded with seriel techprenuer Thomas Pays. Focused on driving innovation in the payments industry, Adams is an FNB Innovation Awards 2017 finalist as well as an Endeavour Entrepreneur.