ChatGPT and the age of accessible AI 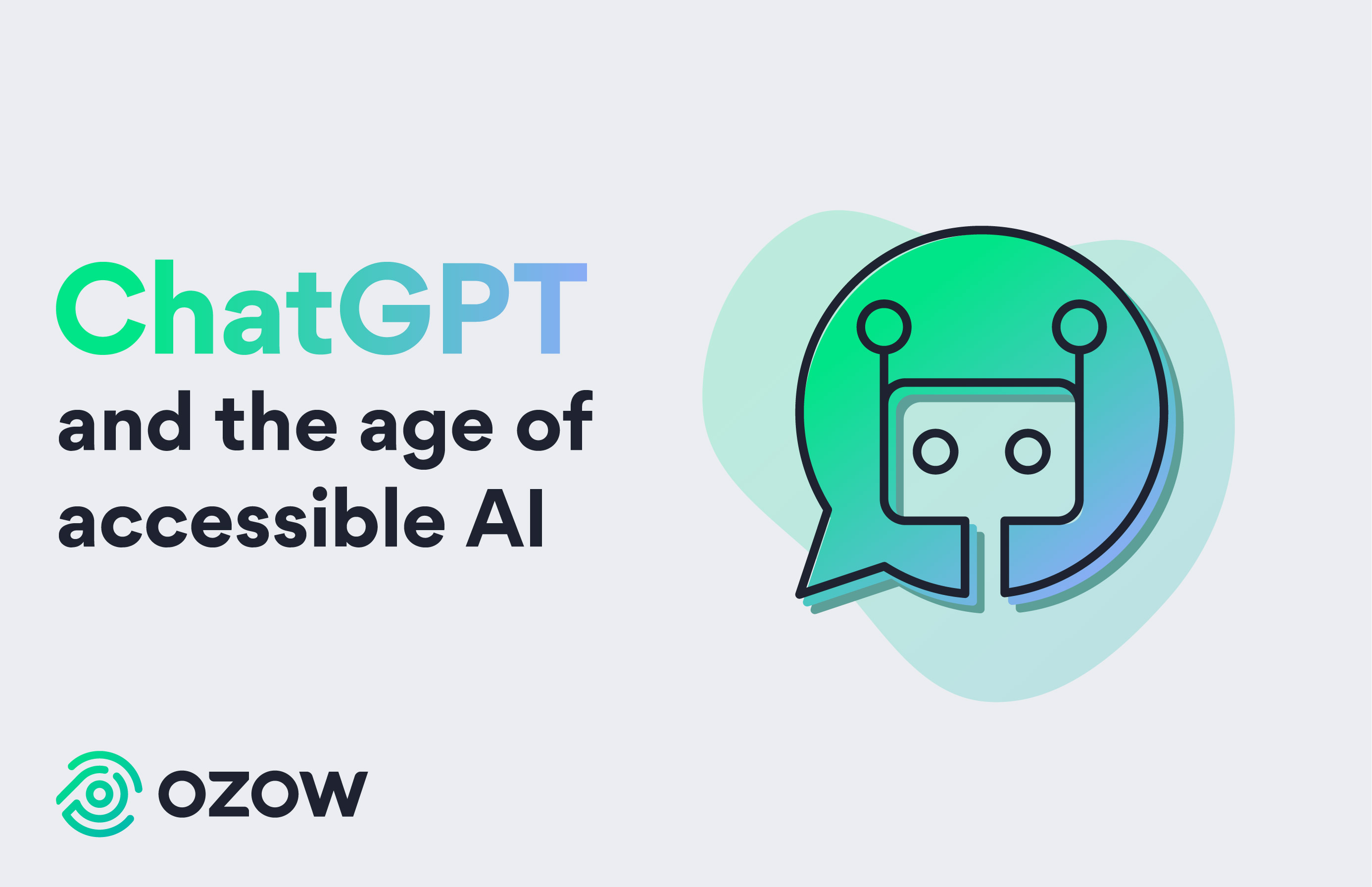 An AI helped write this article.

While the above statement is true, it’s also rapidly losing its shock value in a world where major news publications have been revealed to be doing exactly the same thing, and AI has even been explicitly deployed in advertising campaigns.

Nevertheless, the current fascination with one AI tool in particular – the OpenAI-developed ChatGPT – is reigniting debate around the ethics and use of Artificial Intelligence in our society, particularly in creative arenas.

So what is it about ChatGPT that has led to such fierce discussion, and what does it mean for the future of AI?

Why this time’s different

Most contemporary Artificial Intelligence tools are based on deep learning, a multi-layered subset of machine learning. This isn’t a new approach; in fact it’s been key to building now ubiquitous solutions such as Google and Apple’s smart assistants.

However at the beginning of this decade, a major shift began to take place. DALL·E 2, Midjourney, and Stable Diffusion – all released within a three-month period – allowed users to generate images by inputting complex prompts. And these tools were just three amongst many.

These AI have been noted for the high quality of the compositions they create, but this comes with ethical questions: the deep learning models were trained on existing artworks, raising thorny issues of ownership and exploitation of artworks and the artists who created them. The debate was thrown into sharp contrast in September 2022 when the winning entry in the Fine Arts category at the Colorado State Fair turned out to be generated by AI.

But while these are valid and important questions to resolve, the release of ChatGPT raised even bigger ones. Unveiled in November 2022, the AI is able to generate human-like text responses to prompts, even morphing to mimic specific writing styles and professions. But that’s not its real superpower.

“In my view the way OpenAI packaged the technology is the real breakthrough,” says Tiaan Taljaard, Ozow’s Chief Data Officer. “Previously, AI models were mostly available to engineers. Packaging ChatGPT as a search engine, and simplifying the interaction with the technology is what has truly excited me.

ChatGPTs success has generated immediate interest, with Microsoft rumoured to be preparing a $10 billion investment into OpenAI, with speculation that the software giant may be targeting an inclusion of the technology in its search platform, or even for the Microsoft Office suite of tools.

The reasons for this investment are immediately obvious. ChatGPT’s ability to generate human-like writing can make many mundane office tasks a thing of the past: It can quickly generate emails, help create internal documents, and otherwise reduce administrative loads, requiring only a guiding human hand.

Roland Straub, Ozow’s Head of Customer Operations, sees the potential of AI, but also points to some of the limitations: “While systems like ChatGPT will be able to replace a number of linear or entry level functions within an organisation, there will always be a need for humans to validate the performance of these tools versus the intended outcomes. The important aspect of this technology is that at its core foundation, it remains ‘artificial’ intelligence, and as a result will not be able to replace the nuanced ability of humans to understand the broader impact or landscape when making decisions.”

The promise of AI is exciting. But its growth has led to valid anxieties around its use, and ChatGPT is at the forefront of those concerns.

The ability of OpenAI’s GPT-3 – on which ChatGPT is based – is startling. Its writing is so convincing that when major tech journalism outlet CNET began using AI to generate guides, it took months for anyone to notice. It’s also been used by celebrity and entrepreneur Ryan Reynolds to generate an ad in his own voice, with a result that he described as “mildly terrifying, but compelling”.

These examples pose a clear ethical challenge. The ability of text-to-text AI tools to mimic the writing voices of others offers the potential for impersonation or deception. Someone could use the model to impersonate another person online, or to create fake content that is designed to deceive or mislead others. Additionally, there may be issues related to privacy and consent, as the model could be used to generate content that appears to be written by someone without their knowledge or permission.

Indeed, the paragraph above is the result of prompting ChatGPT with the phrase “what are the ethical challenges of ChatGPT's ability to mimic the writing voices of others?”

Roland highlights how this might be deployed: “Not only does ChatGPT allow potential hackers to draft emails that sound more convincing, but the technology can actually be used to assess the results of these attacks and learn to make them more effective in the future.” Already, educational institutions are girding themselves to combat the expected wave of AI-generated assignments by enterprising student bodies.

Yet despite the multiple controversies surrounding Artificial Intelligence, many believe the future may not be as dire as it seems.

“Conversational AI chatbots have been around for a while, and are based on the same type of technology,” explains Roland. “In the future, chatbots and live chat agents will harmonise, creating a more personalised and efficient service for your consumers. An example of this will be the ability to hand off conversations between the two systems depending on the unique flow of a consumer’s interaction with the organisation, allowing the bot and agent to work together to find a more efficient manner of serving this consumer.”

Humanity finds itself at an inflection point. But while it seems novel, the reality is that we’ve been here before.

Previous industrial revolutions saw the rise of factories, the birth of the automobile, or the first transistors, and changed the ways in which people across the globe worked and interacted. Today, the rise of AI holds the potential to fundamentally change the way we live as well, and many believe this will be for the better.

Tiaan highlights the potential by describing how AI technology will “remove the mundane repetitive tasks that so many of us do today, freeing up capacity to focus on more impactful work.”

“The ChatGPT release is amazing, my testing and research has illustrated so many ways in which it could assist us all to accelerate some of our tasks.”

He highlights the vast potential of its applications, such as mining text databases and analysing their contents using data extraction to remove relevant insights. They’re even able to reduce the decision-making burden placed on humans, with anomaly and fraud detection, time-series forecasting, and recommendation engines. Looking further to the future, ambient AI may be able to flag production failure points on factory floors before they become critical, with augmented reality implemented to alert workers. This has real implications for efficiency, but more importantly for safety in environments dominated by industrial machinery.

But while Artificial Intelligence has great potential, he’s not blind to the needs of a human touch: “Where AI falls short is that we still require human creativity and compassion in the workplace. The impact on the workplace will increase as AI becomes more accessible,” he continues, “but the question we should ask is do we fear that we will not gain the skills required to compete against robots in the workplace or do we choose to be excited to learn new skills to prepare for future jobs.”

“McKinsey predicts that AI investments could lead to adding 20 to 50 million new jobs globally by 2030,” he says, before pointing out the opportunities on offer: “Having vacancies created does not necessarily mean the skills will be available to perform these new roles. There will be a gap between the skills employers are looking for today, and the potential skills required by roles in the future. It’s up to us to keep reinventing and upskilling to ensure we are ahead of technology advancements. I believe that we’ll be able to achieve this.”

So what of the hype surrounding ChatGPT and its siblings? Perhaps it’s best to let it have the last word: AI tools have the potential to revolutionize the way we interact with technology and each other. The future of AI tools like ChatGPT is very promising, and we can expect to see continued advancements in its capabilities and applications in the coming years.

Couldn’t have put it better.