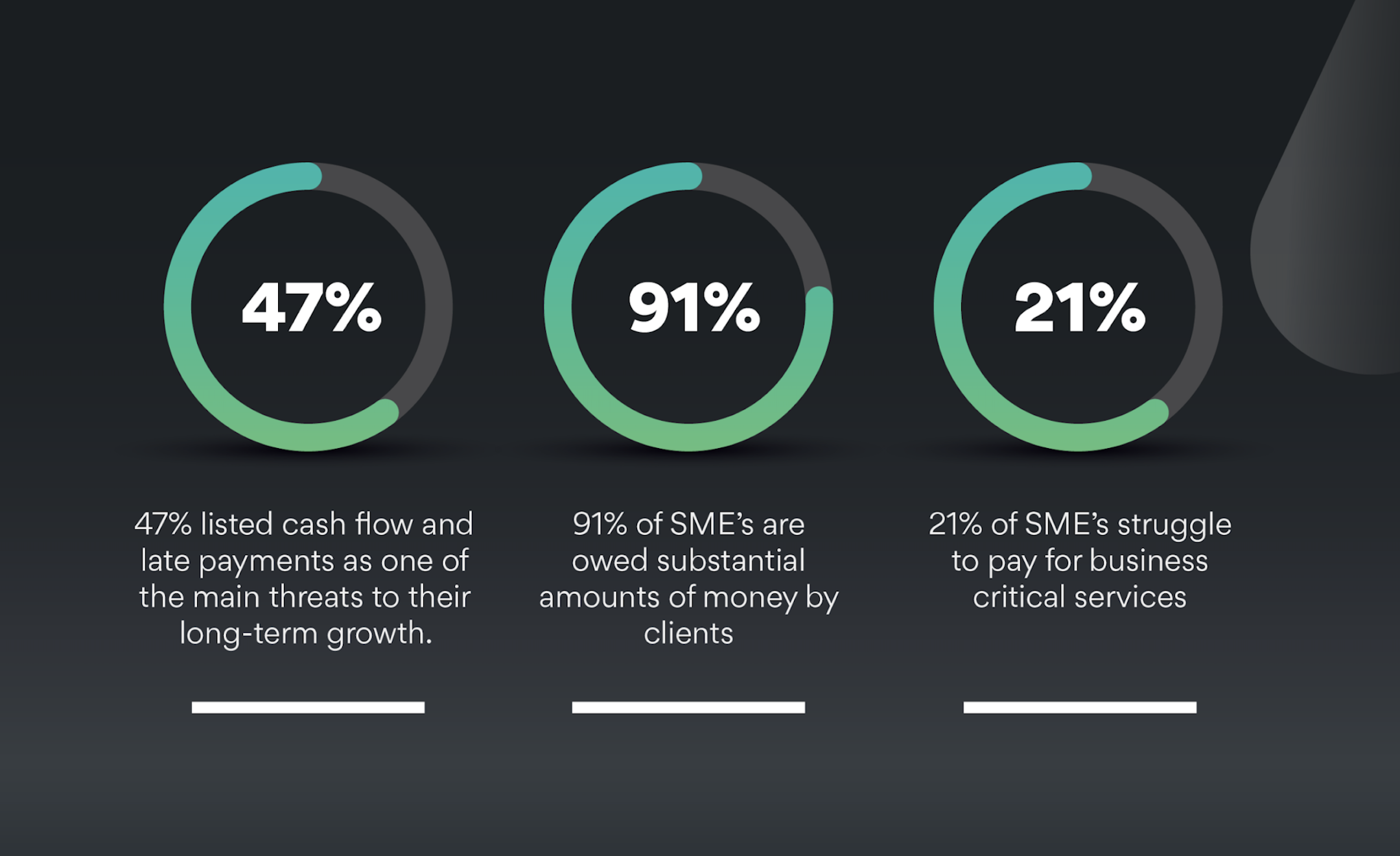 While it is not unusual for the giant corporations to play down the significance of small to medium-sized businesses, any dismissal of this sector is far from justified. Those who may doubt the importance of these more modestly-sized enterprises should note that, collectively, SMEs already employ close to half of the nation’s total workforce and contribute more than a fifth of its gross domestic product.

Furthermore, the government’s National Development Plan predicts that, within the present decade, that contribution could rise to between 60 and 80 per cent.  In the process, SMEs are expected to account for around 90 per cent of an anticipated 11 million additional jobs for South Africans. In practice, the role played by SMEs is a vital one, especially in a mixed market economy like that of South Africa. However, although that may be the plan, there remains a significant threat to both the current and future performance of this crucial business sector.

Late Payments are limiting the growth of SMEs

Regardless of their size, all businesses can expect to experience challenges and, in most cases, they are resourceful enough to find ways in which to overcome them. However, while developing a strategy to deal with changing consumer demands, aggressive sales campaigns by one’s competitors or cheap imports is generally feasible, managing a steadily expanding debtors book can be somewhat more complicated. Typically, it is the last of these challenges that will pose the greatest threat to an SME. A recent independent survey of around 500 South African SMEs has revealed some insights that give cause for serious concern.

Of the 502 companies surveyed, 91 per cent revealed that they were owed substantial sums of money by clients who had failed to meet their agreed terms of payment.  On average, those outstanding payments amount to almost R100K in any given month and have become a consistent feature within the small to medium business sector.

Part of the problem appears to stem from the fact that larger, more established businesses have tolerated the culture of late payment for so long that it has become entrenched in South African society.  While such tolerance may be something those larger firms can afford, the cost to an SME can be crippling. Almost half of those surveyed indicated that restricted cash flow due to late payments was the single biggest threat to their growth plans.

Healthy reserve of cash is essential for any business to pay its staff, its suppliers and any third-party service providers as well as to invest in its future growth plans.  Most of the companies surveyed were experiencing an inability to meet one or more of these obligations due to cash flow difficulties. Sadly, 17% of the participating small businesses have since declared bankruptcy, underlining just how severe the impact of this entrenched late payment culture can be.  It is a culture that will have to change if the nation’s SMEs are to meet the ambitious economic goals set by the National Development Plan.

New Legislation could provide some relief  for cash-strapped SMEs

Effectively, a customer who, for whatever reason, chooses to withhold or delay payment for goods or services received is treating the payee as a credit provider. Where the payee is a bank or a finance company, making late payments would automatically add to the interest already due under the terms of the loan agreement. Ultimately, if the outstanding amount remains unsettled, legal proceedings would likely follow.

In an attempt to level the playing field for SMEs, the National Treasury issued an economic policy paper in which it proposed that these beleaguered small businesses should also have the right to levy interest on their outstanding accounts, in line with official lenders. While such a move could provide a partial solution and is likely to be welcomed within the sector, additional measures will be necessary for South Africa’s small businesses to encourage a permanent move from the dangerous culture of late payment.

As it happens, there are some simple and relatively inexpensive steps that a small to medium-sized business can adopt in an attempt to limit the incidence of late payments. The most obvious of these is to update their accounting procedures.

While handwritten ledgers are all but extinct, spreadsheet programmes remain popular with startups and small businesses, often to save the cost of purchasing a dedicated accounting package. Ultimately, however, the time needed to update a spreadsheet can prove more costly than migrating the accounting function to a more effective platform. The transition to a more automated system will not only provide the means to generate bulk invoices in a fraction of the time but will also flag any unpaid accounts.

Once armed with this accurate and timely information, a friendly reminder by telephone, text or email is often all that is necessary to resolve many of those cases in which genuine oversights may have led to an overdue payment. That said, not all late payments are intentional or are even the result of a memory lapse. There is conclusive evidence that, in a significant percentage of cases, shortfalls in the available payment procedures lie at the root of the problem. All is not lost, however, as the culture of constant innovation within the Fintech industry has seen some local companies offer a range of payment options. One, in particular, has developed a simple but effective fix for this late payment culture problem.

Of the 49 million South Africans who have a bank account, a mere 16% of these own a credit card. For the remainder, paying a bill might, under normal circumstances, have involved a lengthy trip to the payee’s premises. However, the Covid-19 lockdown, which initially made such trips illegal, has left consumers concerned about the lingering danger of infection following the easing of restrictions.

For those who have the facilities, performing an electronic funds transfer from home has become the most viable alternative. For a significant number of South Africans, however, using the traditional EFT process is a challenge. For a start, it is complicated and requires accurate input from the user, so it is prone to human error. Many consumers are concerned about the security of conventional electronic transfers, fearing that their personal information could be intercepted and used to defraud them. In 2017 alone, digital banking crimes led to gross losses of R250 million, and the incidence has been growing year on year.

From a merchant’s viewpoint, the process often involves waiting as much as a week before a payment finally appears in the company’s account, delaying instalments that were, in fact, made on time.

Ozow’s payment solution offers both merchants and consumers a means to securely automate the conventional EFT process and to complete payments in less than a minute. Customers require no downloadable app or signup and pay no fees to use the system which offers a range of integrations.

The Ozow solution includes an alternative online payment option for an e-commerce site. However, the most valuable benefit to SMEs is likely to be the option to bill their customers, individually or in bulk, and to enable instant payments with a single SMS or email. A payment link in the message allows the customer to select his or her bank, and log in using their usual credentials. All details of the payment are then added automatically, leaving customers to choose which account to pay from and complete their bank’s routine verification process.

Through teamwork, Ozow and SMEs can significantly reduce the impact of late payments and help to build a sound economic future. It’s time for SMEs to take back control of their cash flow and future growth prospects. This Ozow Easy, Ozow Fast, and Ozow Trusted automated, and instant EFT solution is making it possible.

9 minutes, 42 seconds
Why use a lemon to build a unicorn?
Read more